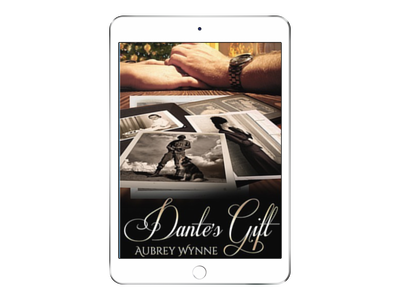 Kathleen James has put her practical side away for once and looks forward to the perfect romantic evening: an intimate dinner with the man of her dreams and an engagement ring. She is not prepared to hear that he wants to bring his grandmother back from Italy to live with him.
Dominic Lawrence has planned this marriage proposal for six months. Nothing can go wrong-until his Nonna calls. Now he must interrupt the tenderest night of Katie’s life with the news that another woman will be under their roof.
When Antonia’s sister dies, she finds herself longing to be back in the States. An Italian wartime bride from the 1940s, she knows how precious love can be. Can her own story of an American soldier and a very special collie once again bring two hearts together at Christmas?

Bestselling and award-winning author Aubrey Wynne resides in the Midwest with her husband, dogs, horses, mule and barn cats. She is an elementary teacher by trade, champion of children and animals by conscience, and author by night. Obsessions include history, travel, trailriding and all things Christmas.
Her short stories, Merry Christmas, Henry and Pete’s Mighty Purty Privies have won Readers Choice Awards and Dante’s Gift received the 2016 Golden Quill, Heart of Excellence, and Aspen Gold award, as well as being a Maggie finalist.
Aubrey’s medieval fantasy series launches in 2017 with Rolf’s Quest. Besides the Chicago Christmas novellas, Aubrey will also release “A Vintage Romance” series inspired by tales of her stepfather, who served for the British Air Force in WWII. The stories will be set in the 40s & 50s.

Some babies were born with a silver spoon in their hand. Tom was born holding a microphone. Well… almost. From the age of 10, Tom was carrying his trusty cassette recorder and microphone with him everywhere – conducting interviews, doing impromptu skits with friends and family – he even took it to school and narrated plays that he wrote with friends. WIthout any idea where this would lead, other than the obvious radio DJ jobs, Tom stumbled upon voice acting in 1994 through a friend who worked at a local, Los Angeles radio station. She helped him get a few gigs and opened a whole new world – beyond his portable recorder. Family and a “real job” took over for almost two decades, however, as Tom had to temporarily put this part of his life on hold. When podcasting started in 1995, Tom jumped on the chance to build a modest home recording studio and create his own shows without having to take time away from his family or job. One of these podcasts, The Unreal OC, he did with his wife, Elizabeth, and there are still dozens of hilarious episodes you can check out online at http://www.TheUnrealOC.com.
Tom didn’t start recording audiobooks until early 2017, so he’s a relative newcomer to this field; but, as you’ve read, he’s no stranger to narration, in general. Tom loves audiobook narration – and has produced all 22 of his books “in the margins” surrounding a busy life with a full time job as a marketing copywriter, three kids living at home, and his wonderful, supportive wife who, among other crucial things, “helps keep the chaos controlled,” according to Tom. Tom’s audiobooks are all on Audible.com and you can listen to some samples of his narrations as well as his commercial demo on his website, http://www.TomVoiceover.com.

Wynne has a good romance here. But I will say that I was not a fan of the leading lady. Kathleen was very rude and annoying through most of this story. I’m glad she learned to grow up, but honestly she was breaking my heart being all like: I don’t wanna be with you and your grandma in the same place. Pretty rude considering the grandma was of sound mind, she just couldn’t live on her own as she was old and needed some help. I’d understand if the grandma had alzheimers or dimensia of some sort. I really enjoyed grandma’s story about her love life. It was very sweet and heartbreaking. Dominic is also a sweet and loving boy/man. I found it endearing the way he loved his grandma. It was in that caring for family kind of way, not being a momma’s boy way. I give the story a 4.5/5 stars.

Tom did a good job narrating. He had good voices for the main characters and I think captured the tones for each well. I definitely feel like he added a lot of fun to this story and I’d love to listen to him perform something else! Studio production sounds great as well. I give it a 5/5!

I received this audiobook as part of my participation in a blog tour with Audiobookworm Promotions. The tour is being sponsored by Aubrey Wynne. The gifting of this audiobook did not affect my opinion of it.