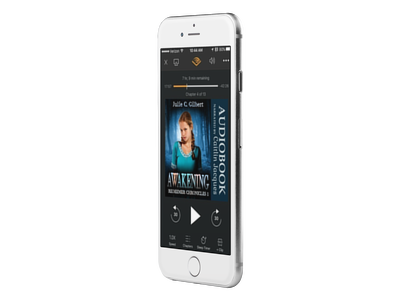 Being the Chosen One could kill her….

Victoria Saveron knows two things for certain. Dark forces want to kill her, and her friends have cooler powers than she does. Katrina can shapeshift and Tellen can tap into destructive magic currents.

Everything else is uncertain and rumors abound.

Victoria might be the Chosen One, whatever that means. Her father might be able to help them, but only if they can find him. Coldhaven’s villagers might be able to offer them food and shelter. Some fool might be running around unlocking Darkland portals to raise an undead army.

The further Victoria and her companions get on their journey, the more dangers and betrayals they face. They must awaken Vic’s true powers or forfeit the world.

Caitlin Jacques is both an awesome narrator and a stellar audio engineer. She lives in Washington.

This was a very fast paced novel for me! Gilbert’s story just jumps right in and you got to figure out what’s going on with all the bits and pieces she gives us. I loved it! I was a little confused at first, but found myself getting attached to the characters instantly. They are so fun!! And the narrator’s voice really breathes life into them. Jacques is amazing! She does such good work with each character, making them different and also fun to listen to. This is a very well produced audio novel. I would give the story a 4/5 for it being a little confusing at first and the audio a 5/5 for the depth of Jacques’ skill!

I received this audiobook as part of my participation in a blog tour with Audiobookworm Promotions. The tour is being sponsored by Julie C. Gilbert. The gifting of this audiobook did not affect my opinion of it.

Jan. 30th:
Notes from ‘Round the Bend