A Looming of Vultures 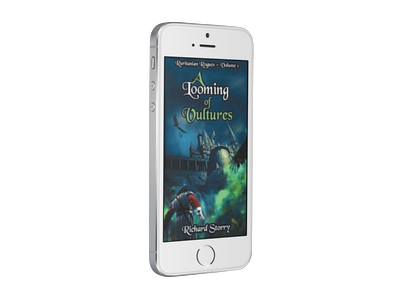 While an ugly war with its neighbouring realm continues to rage, the insulated members of Ruritania’s upper class laugh and dance their way through their superficial lives. Some people, increasingly disillusioned by the pointless conflict, start to consider how the King might be persuaded – or forced – to end it.

Meanwhile, an increasing number of items of great value are going missing from those attending these high society gatherings.
At whom will the finger of suspicion point? Who can be trusted?

With so many competing, yet intertwined, agendas, what will be the outcome of this looming of vultures?

Richard studied at the Royal Academy of Music for five years, between 1984-89, graduating with high honours and a recital diploma – the only guitarist in eight years to be awarded such an honour – and winning the Julian Bream prize.
After recently being adapted for the stage, Richard’s first novel, “The Cryptic Lines” has now been published and is available for download from the kindle store at Amazon here; and his song “Until You’re Safely Home” is being performed frequently by various Military Wives Choirs in many different parts of the world.
Richard’s second novel, “Order of Merit” was published in September 2015. His third novel, “The Black Talisman” was published in January 2016, and his fourth – “The Virtual Lives Of Godfrey Plunkett”, was published in April 2016. You can find out more about Richard’s books at the Cryptic Publications website here.

Jake Urry has been narrating and producing Audiobooks since February 2016, and in that time has released 28 titles, including The Cryptic Lines by Richard Storry, White is the Coldest Colour and A Mind to Kill by John Nicholl, the PI Harlan Ulrich series by Ambrose Ibsen, The Tesla Gate by John D. Mimms, and The Dragon Apocalypse Series by James Maxey. In 2018 Jake will be working on a wide range of Audiobooks across the genres of Mystery, Thriller, Fantasy, Horror and Sci-Fi.

Storry has written a very fun and suspenseful novel! I enjoyed the quirkiness of the two main characters. They have a suave kind of vibe to them and have a lot of fun in this novel! I enjoyed the suspense with the crimes, to see if they would get away with it all. I laughed a lot during this story, which isn’t what I was expecting. But I was glad for the laughs. It made the overall experience much better. It flowed pretty well, although I do have to knock a point and a half because of the women. They were very boring and didn’t seem to add anything to the story except to exist. I’d like them to be more vocal in Storry’s future works. I give the novel a 3.5/5.

The narration is done by Jake Urry! Who is amazeballs! I love his voice. And honestly I could listen to him narrate really anything. Urry has a lot of skill and this story showcased a large range of it. I hope that I get to listen to him in more works going forward. If you’re looking for audiobooks just to listen to because of the narrator I highly recommend Urry! Seriously, he can read anything and I will sit for hours! 5/5 stars!

I received this audiobook as part of my participation in a blog tour with Audiobookworm Promotions. The tour is being sponsored by Jake Urry. The gifting of this audiobook did not affect my opinion of it.

2 thoughts on “A Looming of Vultures”