Curse of the Zombie Omelet: The Zee Brothers Zombie Exterminators #1 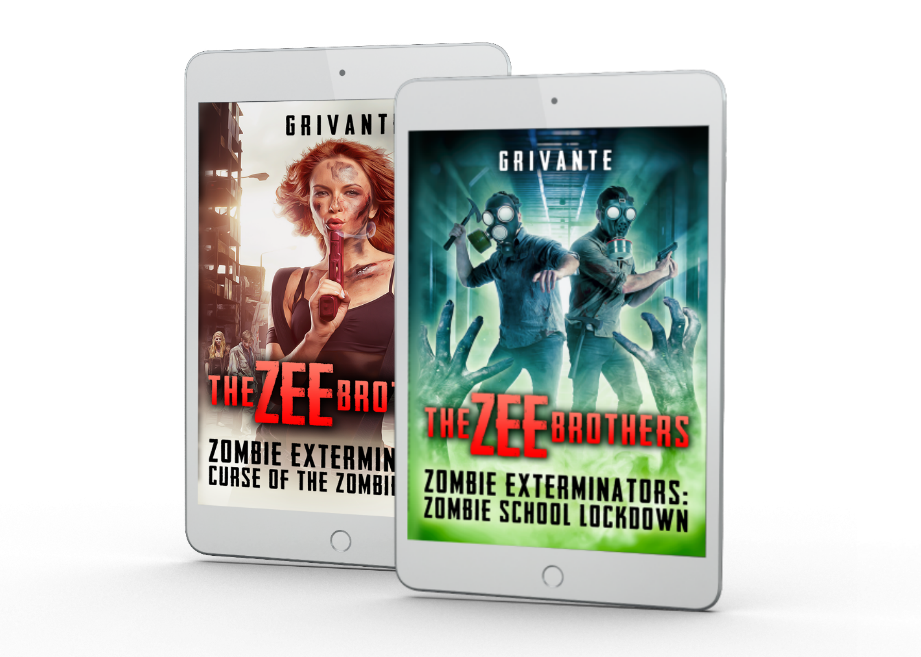 An Arizona suburb over-run by a long buried tribe.

A race to stop the dead from unleashing an ancient curse.

Two brothers keeping the apocalypse at bay, one job at a time.

The Zee Brothers: Curse of the Zombie Omelet is our action packed and hilarious introduction to Jonah, Judas & JJ, the lovable disaster prone trio, responsible for keeping the zombie apocalypse from becoming a reality.

Gruff and handsome, Jonah Zee, is the dominating, classic music loving leader, that calls the shots and keeps them coming.

Tobacco chewing, Judas Zee is the gun slinging, rock music loving goofball, that is slow to learn, but always has his big brother’s back.

And the hot and sassy JJ, is the heroine that captures the brother’s hearts and eyes, while doing her best to keep her dog, Xanadu, out of trouble.

Grivante writes sci-fi, fantasy, horror and post-apocalyptic fiction with a writing style that bounces between comedy and action-packed horror, most often mixing together to create things like Zombie Omelets and Spleen Soup.
He is best known for his Zee Brothers: Zombie Exterminator series, a comedic horror series that both celebrates and pokes fun at everything that makes zombie pop culture cool.

He loves things like George Romero’s “Of The Dead” movies and Robert Kirkman’s “The Walking Dead” and feels there are many authors telling those types of stories well. He’ll leave that type of story telling to them and keep focused on the weird gonzo-action filled tales he likes to write and his readers like to read!

Bred in a test tube in a far distant future, Ian is a prototype never meant for mass production. A rare genetic hybrid of opera singer, actor, narrator, rock vocalist, and electronic music producer, he travelled back in time to join forces with Earth’s last and best hope: the underpaid, under-appreciated, and oft misunderstood writers of science fiction, fantasy, and horror. Since then, he has narrated over 20 audiobooks, voiced characters in video games and cartoons, and melted many a face with his powerful vocals.

So I wasn’t quite sure what I was getting into when I saw the blurb of this book. It just sounded so interesting and weird that I wanted to read! And so I listened to this as fast as possible. It was excellent!

Grivante has written this bizarre and cool Zombie world with a lot of humor. There are a lot of laugh out loud moments and I teared up so much because of them haha. I truly enjoyed this author’s style! He makes a weird premise turn into something amazing and gripping! I give the story a 5/5!

The narrator is excellent as well. He gave the brothers very distinctive voices and I was never unsure of who was speaking. I like the other work he did as well with Zombie sounds and what not. He probably honestly made the jokes stand out even better than if I had only been reading them. I know I’m definitely looking forward to the next story in this series! I give it a 5/5 Overall!

I received this audiobook as part of my participation in a blog tour with Audiobookworm Promotions. The tour is being sponsored by Grivante. The gifting of this audiobook did not affect my opinion of it.

One thought on “Curse of the Zombie Omelet: The Zee Brothers Zombie Exterminators #1”