The Woman in the Camphor Trunk 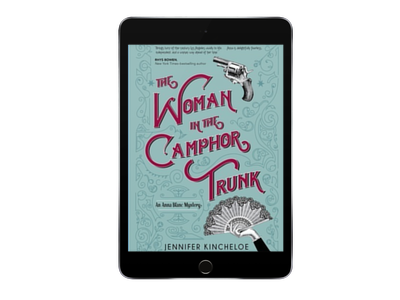 Los Angeles, 1908. In Chinatown, the most dangerous beat in Los Angeles, police matron Anna Blanc and her former sweetheart, Detective Joe Singer, discover the body of a white missionary woman, stuffed in a trunk in the apartment of her Chinese lover. Her lover has fled. If news gets out that a white woman was murdered in Chinatown, there will be a violent backlash against the Chinese. Joe and Anna plan to solve the crime quietly and keep the death a secret. So does good-looking Mr. Jones, a prominent Chinese leader who has mixed feelings about helping the LAPD and about Anna.
Meanwhile, the Hop Sing tong has kidnapped two slave girls from the Bing Kong tong, fuelling existing tensions. They are poised on the verge of a bloody tong war that would put all Chinatown residents in danger.
Joe orders Anna out of Chinatown to keep her safe, but to atone for her own family’s sins, Anna must stay to solve the crime before news of the murder is leaked and Chinatown explodes.

Jennifer has been a block layer, a nurse’s aid, a fragrance model, and on the research faculty at UCLA, where she spent 11 years conducting studies to inform health policy. A native of Southern California, she now lives in Denver, Colorado with her husband and two teenagers. She’s currently writing book three in the Anna Blanc Mystery series. Book two, THE WOMAN IN THE CAMPHOR TRUNK, is coming out in Fall of 2017 from Seventh Street Books.

Moira grew up in teeny-tiny Rutland, England’s smallest county, which is fitting as she never managed to make it past five feet herself. Moira’s work spans the pantheon of the voiceover world: plays for BBC radio, plays for NPR, video games, commercials, television promos, podcasts, cartoons, movies and award winning audiobooks. She’s won Multiple Audie Awards, Earphone Awards, as well as Audible’s prestigious Book-of-the-Year Award. She has lately set foot in front of the camera again, appearing in “Pretty: the Series” and the Emmy-winning “Dirty Work.”

This is a fun story by Kincheloe! I love mysteries in general so I’m a big fan of reading different types of mystery genres. This is a good historical mystery novel. It transported me to the time period and the main character was hilarious! She was fun and awesome to read about. I love the detective skills and I felt that this could be realistic. Everything flowed well and I highly recommend for mystery fans. I give it a 5/5!

Narrator Quirk has a great voice. She does so well with all the characters and I love love love this! Her tone and accents are great! The production value is good. Everything flows smoothly and nothing is off. I give the audio a 5/5!

I received this audiobook as part of my participation in a blog tour with Audiobookworm Promotions. The tour is being sponsored by Jennifer Kincheloe. The gifting of this audiobook did not affect my opinion of it.

One thought on “The Woman in the Camphor Trunk”