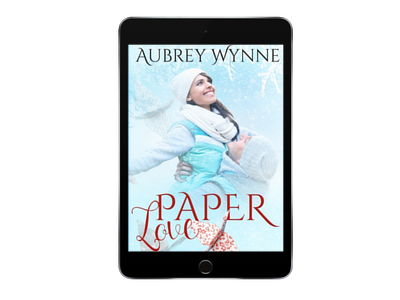 Growing up in a Papua New Guinea mission, Joss Palmateer is a gentle soul with a unique view of life. Still adjusting to a new home in the US and the sudden loss of her mother, love is the last thing on her mind.

Sexy physical therapist Ben Montgomery meets his sister’s friend and the sparks fly. He takes it as a challenge when she ignores his advances, but it’s her extraordinary inner beauty that captures his heart.

With the help of a stray homing pigeon and an old origami legend, Ben sets an unwavering course of romance to win her love.

Bestselling and award-winning author Aubrey Wynne resides in the Midwest with her husband, dogs, horses, mule and barn cats. She is an elementary teacher by trade, champion of children and animals by conscience, and author by night. Obsessions include history, travel, trailriding and all things Christmas.
Her short stories, Merry Christmas, Henry and Pete’s Mighty Purty Privies have won Readers Choice Awards and Dante’s Gift received the 2016 Golden Quill, Heart of Excellence, and Aspen Gold award, as well as being a Maggie finalist.
Aubrey’s medieval fantasy series launches in 2017 with Rolf’s Quest. Besides the Chicago Christmas novellas, Aubrey will also release “A Vintage Romance” series inspired by tales of her stepfather, who served for the British Air Force in WWII. The stories will be set in the 40s & 50s.

Storytelling comprises the earliest memories of narrator, Sara Sheckells, and remains a constant in her life. She resides outside of Boston with her husband, and two children all of whom are voracious readers and audiobook listeners.

An on-air host at WERS 88.9 FM while attending Emerson College in Boston, MA, Sara was a co-founder and host of “The Playground,” a children’s music and spoken word program. She went on to volunteer for several years with Recording for the Blind and Dyslexic (now LearningAlly) where she narrated content ranging from textbooks to children’s stories.

Wynne has written a very sweet Christmassy story to get you in the season! Joss is trying to heal from some family hurt and loss when she meets Ben. Ben is initially this kind of douchey person who is a player of women. She obviously doesn’t trust him, but there is more to Ben than we initially see. He is sweet and very loyal, once he stops his player act. I really enjoyed following along with their romance and felt hope for them to heal each other while I was listening! It gave me all the Christmas and lovey dovey feels 🙂 I’d give it a 4/5 stars!

For the audio I really enjoyed Sheckells and how she voiced both Joss and Ben. She had a clear, steady voice. I enjoyed her pacing and where she paused. The characters certainly came more alive under her voice and I could tell Sheckells was into the story that she was reading to me. I really loved it! I give it 5/5 stars!

I received this audiobook as part of my participation in a blog tour with Audiobookworm Promotions. The tour is being sponsored by Aubrey Wynne. The gifting of this audiobook did not affect my opinion of it.

Dec. 13th:
Notes from ‘Round the Bend