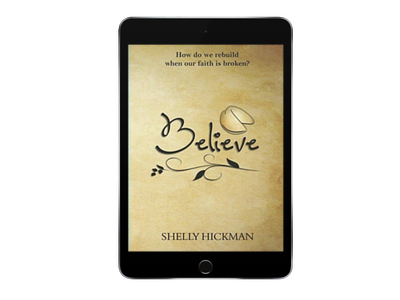 Believe. A message that still taunts her years after the passing of her daughter. In the days of her daughter’s illness, she considered herself a seeker, open to the possibilities of prayer and faith. Now cynical and guarded, she is forced to reexamine her beliefs and relive her past when an old love resurfaces, with a sick child of his own. Believe is a story that examines fractures to our foundations in the face of tragedy. It is a story that asks if prayers are always answered, but often in ways we do not see.
NOTE: Despite the spiritual tone of this work, please be aware it contains strong language.

Hello there! A little about me. A long-time Las Vegas native, I spend my days teaching computer technology to hormonal middle schoolers. I live with my husband of 20+ years and have a teenage daughter, grown son, and child of the furry persuasion.
I’m a huge fan of The Walking Dead and Game of Thrones, as well as movies with stupid humor. Zoolander, Austin Powers, and Monty Python are some of my faves. And if you asked me where the best place in the world is, it would have to be Disneyland. I mean, it is the happiest place on Earth.
I love to write about relationships, family as well as romantic, and my aim is to explore life’s challenges with honesty and humor.

I really loved this story for the reason that I have felt the loss of a loved one through my aunt when I was 11 years old. This book describes the author’s personal journey through grief and how she is able to overcome her hardships. If you enjoy inspirational stories that have faith interwoven then this is a great book for you! I think the best target audience would be those going through their own grief or who have had grief in the past, but really anyone can learn and enjoy listening to this story. I would give it a 5/5!

Thr author of the story has also done the narration which I found interesting. Not every audiobook that has the narrator be the author is well produced. However this one had good quality in editing and Hickman proved herself to be a fairly good voice actress as well. Maybe because this topic is so personal was the main decision behind her narrating, but I did enjoy and it helped m understand how she wanted things to be read. I give the narration a 4.5/5!
I received this audiobook as part of my participation in a blog tour with Audiobookworm Promotions. The tour is being sponsored by Shelly Hickman. The gifting of this audiobook did not affect my opinion of it.