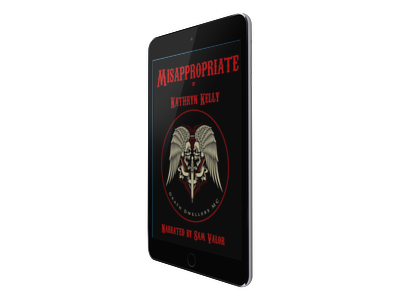 Megan ‘Meggie’ Foy Caldwell is finally getting everything she’s dreamed of, a child, a husband, and family (of bikers) that would truly do anything for her. Her life is finally on the right track. When Meggie asks her husband, Christopher ‘Outlaw’ Caldwell, MC President of the Death Dwellers’, for a church wedding, he agrees because keeping his new found love happy is everything to him.

But when a ghost from the past rolls into town and targets Outlaw Caldwell and his family, it forces him to make decisions that could cost them their happily ever after. Threatening their newfound peace, will Meggie and Outlaw’s love conquer all, or will they both fall back into their destructive patterns that could tear their lives a part?

Kathryn Kelly is living her dream and writing books. She’s always been an avid reader and still devours books in her spare time. She also enjoys football, socializing, music, eating, and jokes. In her head, she’s the ultimate biker babe. In reality, she’s an ordinary girl-next-door and a native New Orleanian. Since the release of Misled in December 2013, she’s been living her dream of writing books. In August 2015, her life took a dramatic turn with the diagnosis of Stage 2B HER2 Positive Breast Cancer. She underwent a double mastectomy, lymph node removal, and breast reconstruction in February 2016. The support of her family, friends, and fans helped her to stay strong and keep her head up. #F*ckCancer became her rallying cry. Now located in the Houston area, she is once again cancer free. Her hair is growing back and her nails are returning to normal. Currently, she is plotting her next book.

Samuel Valor is a voice performance artist and narrator. He hails from Southern California where he spends his time writing, recording, and playing music. He has voiced a wide variety of books and commercials, from Shakespeare to mustard to romance, whatever needs that extra bit of masculine energy to spice it up. He has a four octave range, which allows for a wide variety of voices and sounds.

This is Book 1.5 in the series and is a follow up to Misled. I enjoyed the last story of Maggie and Christopher and am glad to see this continue. However I must warn you this series is not for the faint of heart. It is extremely violent and there are a lot of curse words. In fact I think Christopher pretty much only knows the word fuck. There is also romance and it’s  pretty graphic. Also violent. The romance is also pretty violent. This is one of those reads for me that I love for its edginess but also need a good break from when all is said and done. I enjoyed getting more out of the love story and see it build up more, however I do still see Maggie as a child. She doesn’t seem to have grown up much, though she’s run away and been through so much crap. You’d think even seeing people die and living with a biker gang that commit a crime all the time would help with that as well. For the issue of her acting like she’s a really young teen I’d give this story a 4/5.

As for the audio we have the same voice actor as before. He has improved, but he still lacks emotion? I’m not sure what it is about his voice but it just goes from 0-100 real quick. Christopher will be dead pan and then bam he’s shouting up a storm and acting all emotional. It’s just too extreme. I like when we have that sweet middle spot. But it’s not prevalent in a lot of the story. And Maggie is yet again voiced like a child. Which if the author is meaning her to act like a kid it does make sense for the voice actor to do the same. However if she’s truly meant to sound like soemone close to 20 it isn’t helping. The side characters actually have better voices for me this time around. I do think this actor has a good range. I just don’t get why Christopher has such an extreme range and why Maggie has the baby voice. I’d give the voice acting a 3.75/5.

Overall I would give this 4/5 Stars.

I received this audiobook as part of my participation in a blog tour with Audiobookworm Promotions. The tour is being sponsored by Kathryn Kelly. The gifting of this audiobook did not affect my opinion of it.

Author Kathryn Kelly’s Picks to Play the Characters of Misappropriate

Oct. 19th:
Between the Coverz

One thought on “Misappropriate”