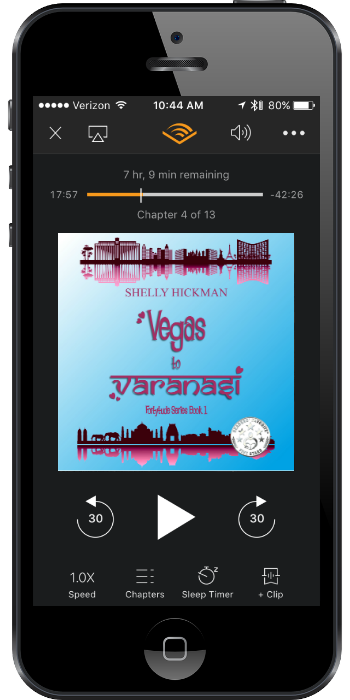 Anna has never been the beautiful one; she’s always been the nice one. So when the gorgeous man sitting across the table at a wedding reception remembers her from high school—and quite fondly at that—she’s taken off guard.
Formerly overweight and unpopular, Kiran has never forgotten Anna, the one person who was kind to him when no one else could be bothered, and Anna’s a bit flustered as she slowly comes to grips with his intense attraction for her.
In what feels like a romantic dream come true, all-grown-up, hunky Kiran invites Anna on a trip to Varanasi. But her troubled, whack-a-do ex-boyfriend starts interfering, creating drama at every turn, which begs the question, “Can nice girls really finish first?”

Hello there! A little about me. A long-time Las Vegas native, I spend my days teaching computer technology to hormonal middle schoolers. I live with my husband of 20+ years and have a teenage daughter, grown son, and child of the furry persuasion.
I’m a huge fan of The Walking Dead and Game of Thrones, as well as movies with stupid humor. Zoolander, Austin Powers, and Monty Python are some of my faves. And if you asked me where the best place in the world is, it would have to be Disneyland. I mean, it is the happiest place on Earth.
I love to write about relationships, family as well as romantic, and my aim is to explore life’s challenges with honesty and humor.

A graduate of PCPA (Pacific Conservatory for the Performing Arts) and the Cabaret Conference at YALE, her credits include Cory (Barefoot in the Park), Penelope (Penelopiad), Gwendolyn (The Importance of Being Earnest), and the 2nd Wyrd Sister (Macbeth). Jazmine has worked in Theatre, Film and Television and has had appearances in Curb Your Enthusiasm and various TV and commercial spots. She was recently seen in the original cast of B Street Theatre’s World Premiere production of Bars and Measures. She has performed in fundraisers and musical variety’s like Broadway Beginnings and COLE, and was a part of a 1920’s review performing at Grauman’s Egyptian in Hollywood. She is currently working in Los Angeles as a Singer and Actress and closed four plays in 2016. She is currently working in Los Angeles.

This has a pretty fun plot line! I enjoyed the setting of India as that’s not someplace I typically read about. I got a great introduction into the culture and spirit of India! I’d give the story a 4/5.

What as most exciting for me was the audio! I enjoyed th ten signing aspect so much. It gave the story another level. The audio deserves a 5/5 And overall a 4.5/5 for the book!
I received this audiobook as part of my participation in a blog tour with Audiobookworm Promotions. The tour is being sponsored by Shelly Hickman. The gifting of this audiobook did not affect my opinion of it.

I recently listened to God is Disappointed in You by Mark Russell and narrated by James Urbaniak. One of the places I listened was at the gym and the people around me must have thought me pretty amusing, because I would just smile and laugh while doing my workout. Audiobooks make the time fly, especially when you’re someone like me who hates going to the gym.

However, audiobooks make it so much easier for people to fit literature and non-fiction into their busy schedules. I recently listened to The Obesity Code by Jason Fung, and I can tell you if I tried to read that to completion, it wouldn’t have happened. As I said earlier, I just don’t have the attention span. As far as fiction goes, when you have a talented narrator such as Jazmine Ramay (smiles), the audio experience can make a story that much more enjoyable.

Hrithik Roshan is who I envision as Kiran. Honestly, I had no idea who he was before I started writing this book. I only discovered him when I searched for an Indian celebrity to model him after. Not only is he lovely to look at, in interviews he seems quite humble and gracious.

As far as reading slumps go, if I just start reading again that usually does the trick. Reading doesn’t require a certain frame of mind the same way writing does, so it’s much easier to pick it up again when the time and mood is right.

I’m also working on narrating my first book, Believe. My voice doesn’t possess the lovely speaking qualities of Jo or Jazmine, but I’ve heard that readers enjoy listening to an author tell her own stories. Believe is a very personal story about the loss of my first child to leukemia, and I’m very close to having all of the audio ready to send to a sound engineer. I know nothing about making audio up to specs for Audible!

Author Shelly Hickman has prepared a soundtrack for Vegas to Varanasi.
https://open.spotify.com/user/jesstheaudiobookworm/playlist/0vAbXt5xHvn6YnKbZAZiLo

2 thoughts on “Vegas to Varanasi”