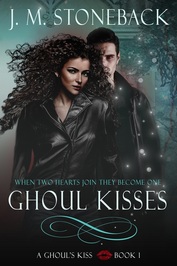 I thought that the storyline itself was interesting. Ghouls, vampires, etc living amongst us without us knowing & this girl stumbles upon that world due to her mother having a key to an ancient and powerful book. However there was a lot of this book that needed some revision work.

For instance the narration. It was very cringey and robotic. We are told from both Eric & the heroines point of view what they are doing. Not shown. Literally told every single thing and why. That’s just way too much. I don’t need to tell in a story that I’m brushing my teeth because they’re dirty and don’t want cavaties lol.

Then there was the info dumping. All the info no one asked for or wanted was given through the narration. Nothing came at the proper time. No I don’t care what happened exactly to your mom or sister when you’re just sitting on the bed and thinking about Eric. That’s just weird. It needs to come up naturally in conversation and not be told through narration!

The heroine (for the life of me can’t remember her name even though I just read lol) was very weird. She just took everything in stride. She was like beauty in beauty and the beast. Once Eric had her locked up she was like: ok this is my life now. No! Fight back! Try running more. Demand explanations! Wtf. I understand she was there for a couple of weeks as well. And then sends her friend a message going: hey I’m cool don’t look for me. lol like that’s not suspicious?? And they don’t even look for the book for the first half of this novel! They just sit inside while the heroine recounts her life story for the umpteenth time to the reader, not even Eric haha.

Don’t read this part if you don’t want an end of the story spoiler, but how in the fuck did she survive getting shot in the head? She is shot point blank in the head. Then Eric is called by his friend and they say: your girl is dead. He heads over, beats up and kills the vampire, then tells them to drive her to the hospital? Like no, she’s dead. You don’t just recover from being shot in the head!! If it was the side and not from a close angle I guess it’s possible, but if the friends checked on her and no pulse then nope she’s a goner….unless she had vampire blood in her system and became a vampire lol. Maybe that’s what the next book is about interspecies that hate each other love lolol.

I just wanted to love it. But I can’t. I really really can’t. If all this was fixed I’d give it a 4.5 star rating. But seeing as its this way right now it honestly gets a 2.5-3 star rating. Less if the plot wasn’t intriguing. On my rating scale it’s a 5/10.

But don’t take just my word on whether or not to read the book. Here’s the link, read the synopsis, see if you want to take a chance. It’s free for KU subscribers if you’ve got one of those! Otherwise it’s only $.99 not terribly much for an interesting plot, just gotta get around those pesky narrators! A Ghoul’s Kiss.