Nate
When Nathan Jackson’s world shattered, and fell out from under him, his two best friends were there to help pick up the pieces. There’s nothing that Nate wouldn’t do for them.
It’s been a few years since then, and Nate’s life seems pretty content between his friends, work, and his love of dirt bike racing. When Nate’s out on the track, he can let it all go, be free, and finally feel at peace.
But when it comes to relationships, Nate’s not looking for anything long-term. He swears that love isn’t worth the risk—until she walks through the doors of Texas Jack’s.
Charlie
Charlotte Davenport knows that something has to give, or life will pass her by. It’s time to add a little excitement to her routine. Charlie isn’t expecting much, but with her friends at her side, she feels ready to break out of her shell. But something’s missing.
When she, and her friends, head out to Texas Jack’s for a night of fun, Charlie meets him — Nathan Jackson. He just might be the man to help Charlie overcome her shyness, and shake up her world.
But first, Nate must be willing to let his guard down and take a chance on Charlie. And if that happens, can Charlie open herself up enough to let him in?

My eyes trail behind him as he slowly makes a path to the bar, noting how tall he is as I carefully scan his body, from his boots to the top of his dark head. He makes it over to the bar with his laidback, easy paced walk, and leans against the bar top. He looks over the side of his shoulder, and pasted on his tan, rugged face is a killer smile aimed right at me, as if he knows I’ve been watching him all along. I quickly duck my chin down and hide a small smile as my cheeks tint with red, knowing I’ve been caught in the act of gawking.

I look up again after a few short minutes, but his back is now facing me as he’s ordering a drink. While I have the chance, I check out his appearance a little more. He’s wearing dark jeans, black boots, and a blue and green plaid, long sleeved button up shirt. I’m pretty sure that through my dazed stare earlier I noticed that he had on a big, silver belt buckle, as well.
I slowly avert my eyes to scan the pool tables for his friends. They couldn’t have gone too far. Sure enough, I find them fairly close to our table. The dirty blond one is looking my way with a knowing smirk on his face, basically telling me that he busted me checking out Mr. Tall and Handsome at the bar. I give him a small smile and look back to the dance floor to see where my friends have gone off to. That’s when I feel someone’s eyes on me. I slowly turn around, and guess what? I was right—only, he’s not where I thought he was. Now he’s standing just a few inches behind me, with a grin on his face. I gulp, then meet his eyes and give him a timid smile back when he asks, “May I?”
I watch as he points to the chair directly across from me. I don’t say anything, but stare at him. 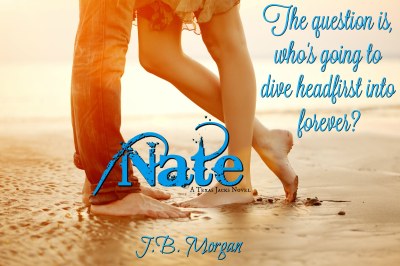 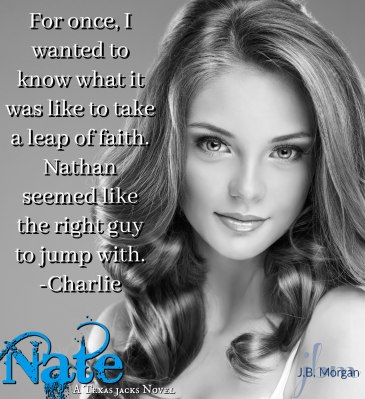 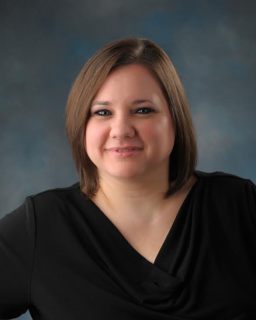 Author J.B. Morgan writes sweet romances with a good dose of humor, sensible heroines, good-decent guys, realism, and happily ever afters. After all, don’t we read to escape reality? So why not read what makes us feel good on the inside and puts a smile on our faces? This is what she strives to put into her novels.
Her debut novel, Holly Lane, landed her as a bestselling author in the Coming of Age genre, and her newest release is titled, Nate (A Texas Jacks Novel).
Growing up, she would dream up hero-rescuing stories in her head, revolving around the boys she had crushes on at school. Later in life she decided to try her hand at writing where she could get some of those ideas out of her head. She’s definitely in love with the idea of love.
J.B. grew up in California, but now resides in Oregon where she’s a wife, mother, author, chocolate lover, and a Yankees fan. She also loves traveling the world. When she’s not writing, she can be found carting her kids everywhere, busy with volunteer work, or trying her hardest to read—without interruptions. 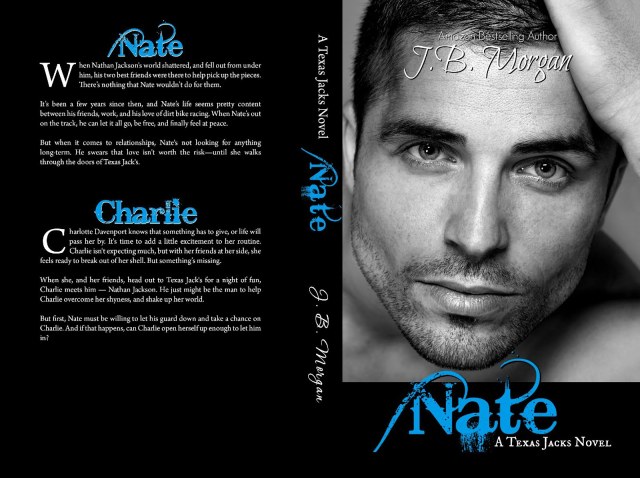